Rotterdam, The Netherlands – April 1, 2015 – The Singapore National Eye Centre, part of the SingHealth Group, has won the first Winsemius Award in the category ‘Collaborative Innovation’. The SNEC won this award for the close cooperation with The Rotterdam Eye Hospital (the Netherlands) from 1997 till now. Both eye hospitals are founding members and initiators of the World Association of Eye Hospitals, the global association of eye hospitals and ophthalmology departments of university hospitals from all over the world. 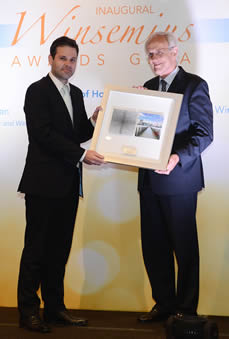 Mr Dirk de Korne, Deputy Director Health Innovation at the SNEC: “There has been close collaboration between The Rotterdam Eye Hospital and the SNEC from the late nineties. A concept Singapore took from Rotterdam is the security protocol to ensure there is no mix-up between right and left eyes during surgery.”

The Winsemius award is part of the ‘DutchCham Business Awards’-competition, an event organized by the Dutch Chamber of Commerce (DutchCham) in Singapore and other countries all over the world. Awards can be won in categories like Singaporean – Dutch Cooperation, Water, Maritime and for example Sustainability. To mark Singapore’s 50th anniversary, DutchCham’s launched its inaugural Winsemius Awards named after the Dutch economic advisor to Singapore, the late Dr. Albert Winsemius.

Examples of the Singaporean – Dutch collaboration in eye care delivery

Hosted by The WAEH Moderator: Maaike van Zuilen, Global Lead, WAEH What is a Schwartz Round? Schwartz Rounds provide a structured forum where all staff, clinical and non-clinical, come together to discuss the emotional and social aspects of working in healthcare. The purpose of Rounds are to understand the challenges and rewards that are intrinsic […]
Read more

8 September 2021 During the annual meetings members have the opportunity to collaborate and exchange information and knowledge about all kinds of topics. Good examples of this include improving the efficiency in the service given to patients and continuous development of patient pathways. Since the establishment of the WAEH in 2007 in Rotterdam, the WAEH […]
Read more

Stay Up to Date With News, Inspirations and Events

A worldwide network of eye hospitals